In bodymetries visitors can interact with a computer simulation of the acellular slime mould Physarum polycephalum. bodymetries explores possibilities of mapping the human body using the spatial logic of this organism. The title combines body and geometry. It is a generative projection environment for body-morphology computation based on the behaviour of this amorphous organism.

WHEN THE EVOLUTIONARY PROCESS SHIFTS FROM BIOLOGY TO SOFTWARE TECHNOLOGY THE BODY BECOMES THE OLD HARDWARE ENVIRONMENT. THE HUMAN BODY IS NOW A PROBE, A LABORATORY FOR EXPERIMENTS. IN THE ELECTRIC AGE WE WEAR ALL MANKIND AS OUR SKIN.

This project roots in Theresa Schubert’s, the artist, personal question what would be the shortest path to connect moles on her body. Through genetic heritage and environmental factors the artist developed a greater number of melanin spots, which she wanted to explore in terms of genesis and visualisation of its distribution. Researching these topics she learned about the living organism Physarum polycephalum, who is known best for its decentralised intelligence and its abilities to construct optimal spatial networks. Known as true slime mould, this huge yellow amoeba possesses some fascinating characteristics.

Skin is the largest perceptual organ of our body, which marks the frontier between the inner and the outer world. It is more than a mere surface, also an interface that communicates as well as an internal memory for environmental influences over time. Being inspired by Marshall McLuhan’s vision of the human body as “a laboratory for experiments” (Culture is our Business, 1970), bodymetries addresses this theme in a generative installation.

Based on the lab experiments, the interaction between melanin concentrations and innervation was imitated with slime mould. A multi-user framework for network visualisations simulates slime mould behaviour rules. Physarum is an experimental substrate for network optimisation and an ‘agent’ for solving distributed geometrical problems. It sees the world as attractants and repellents, providing an experimental analogue for many abstract and physical models. It reacts to stimuli similarly to human skin, e.g. damage by excessive sun exposure = negative phototaxis. The project applies a different method of de-centralised cell organisation to the human body by letting people being emerged into the morphogenesis of Physarum. It challenges the way we perceive our bodies through bio-inspired computing.

In bodymetries visitors can experience virtual slime mould growth on their skin. Visitors enter a semi dark room with a bar table in the center. Some wobbling blobs appear on a small sections of the surface. Visitors are invited to lay their arms onto the desk. The system ‘scans’ it by taking and analysing a picture. The slime mould algorithm starts to grow from the darkest area it can find on the skin. First it starts to explore its world and it learns about the environment (genetic algorithm), which is defined by the shape of your arm and the characteristics of your skin. The virtual slime mould recognises dark areas as “food” and its energy level rises when it finds many points. Then an optimisation process begins where it tries to improve the connection between dark areas (moles and shadows between fingers, wrinkles etc). The installation is a multi-user setup and has four independent scanning zones. 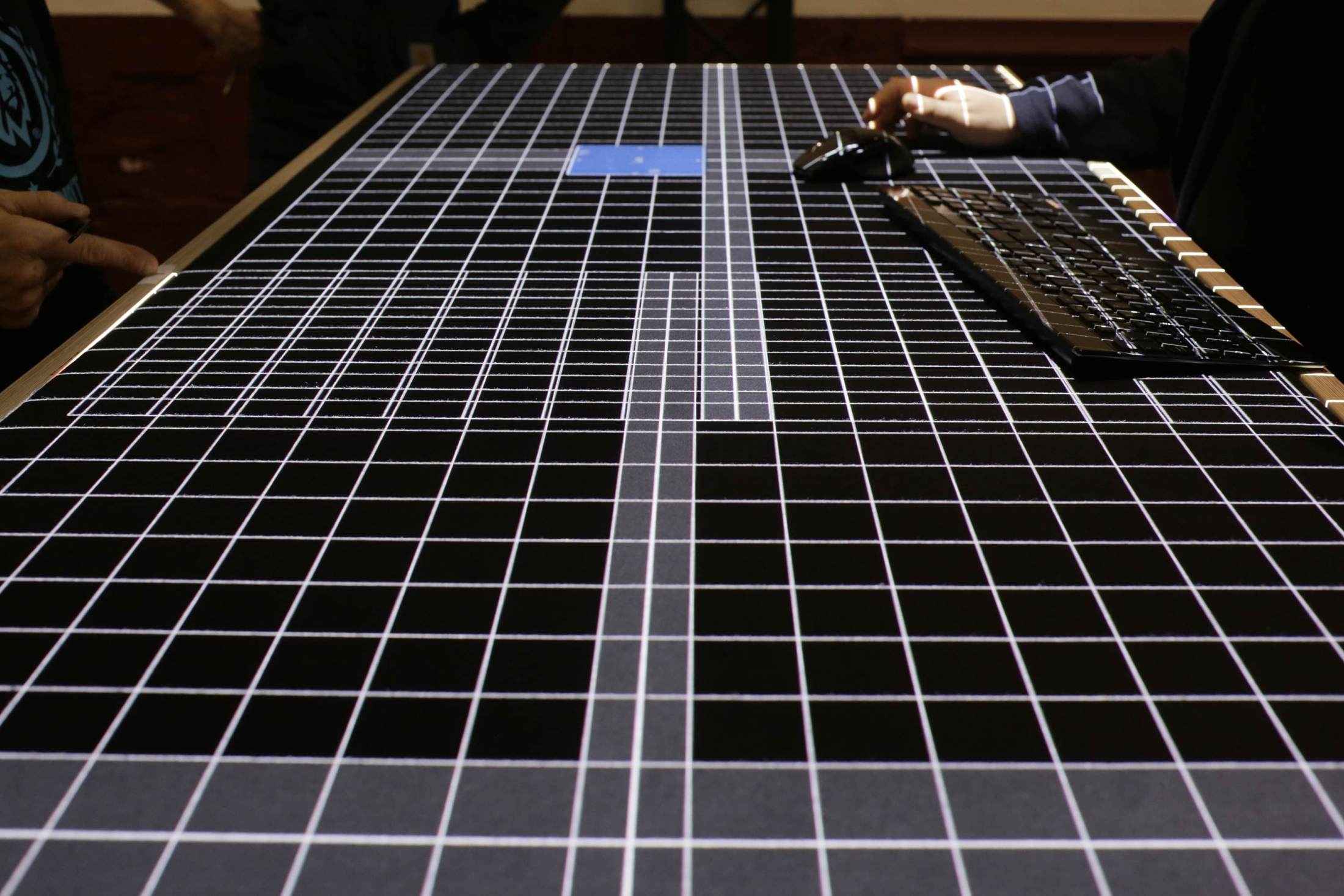 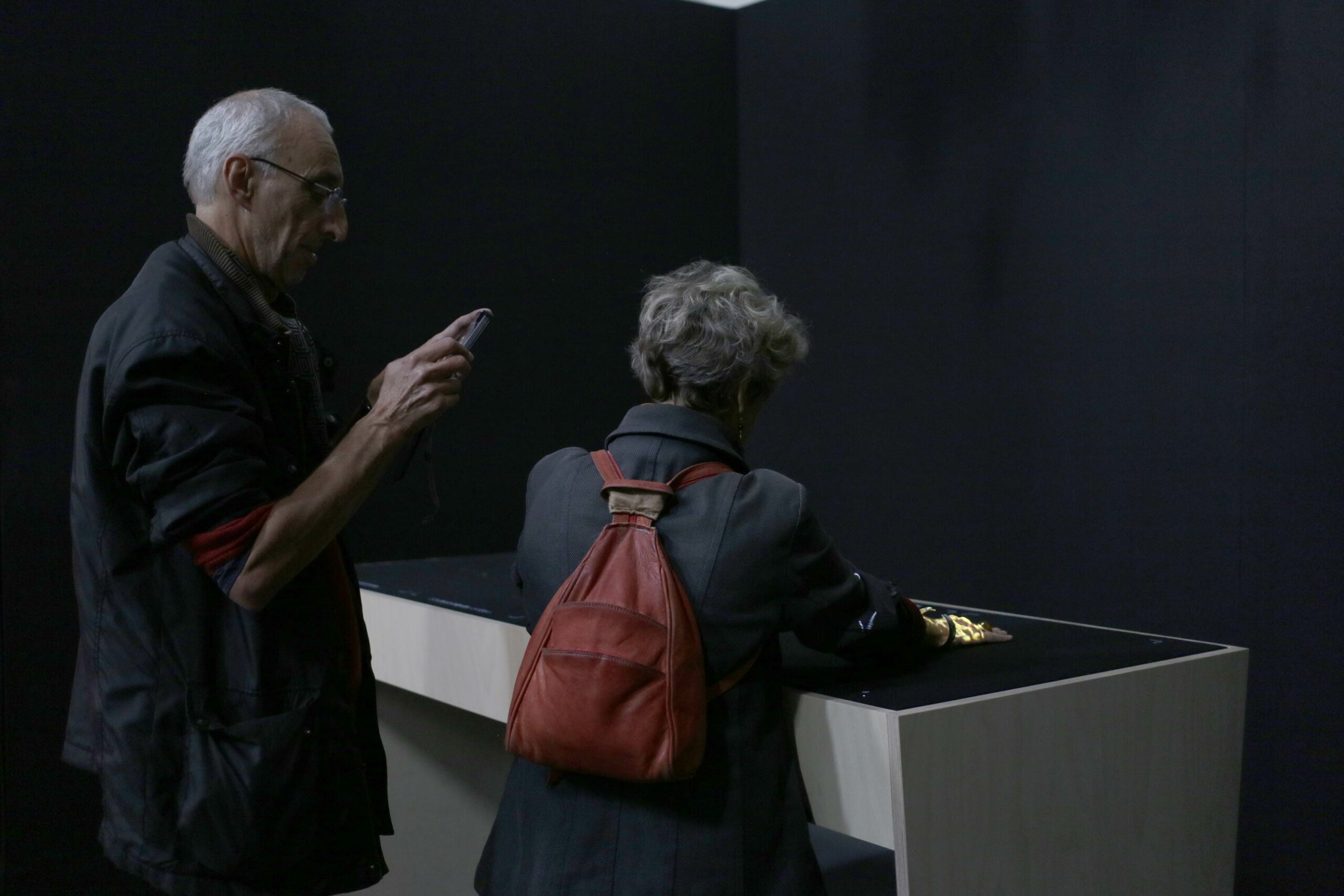 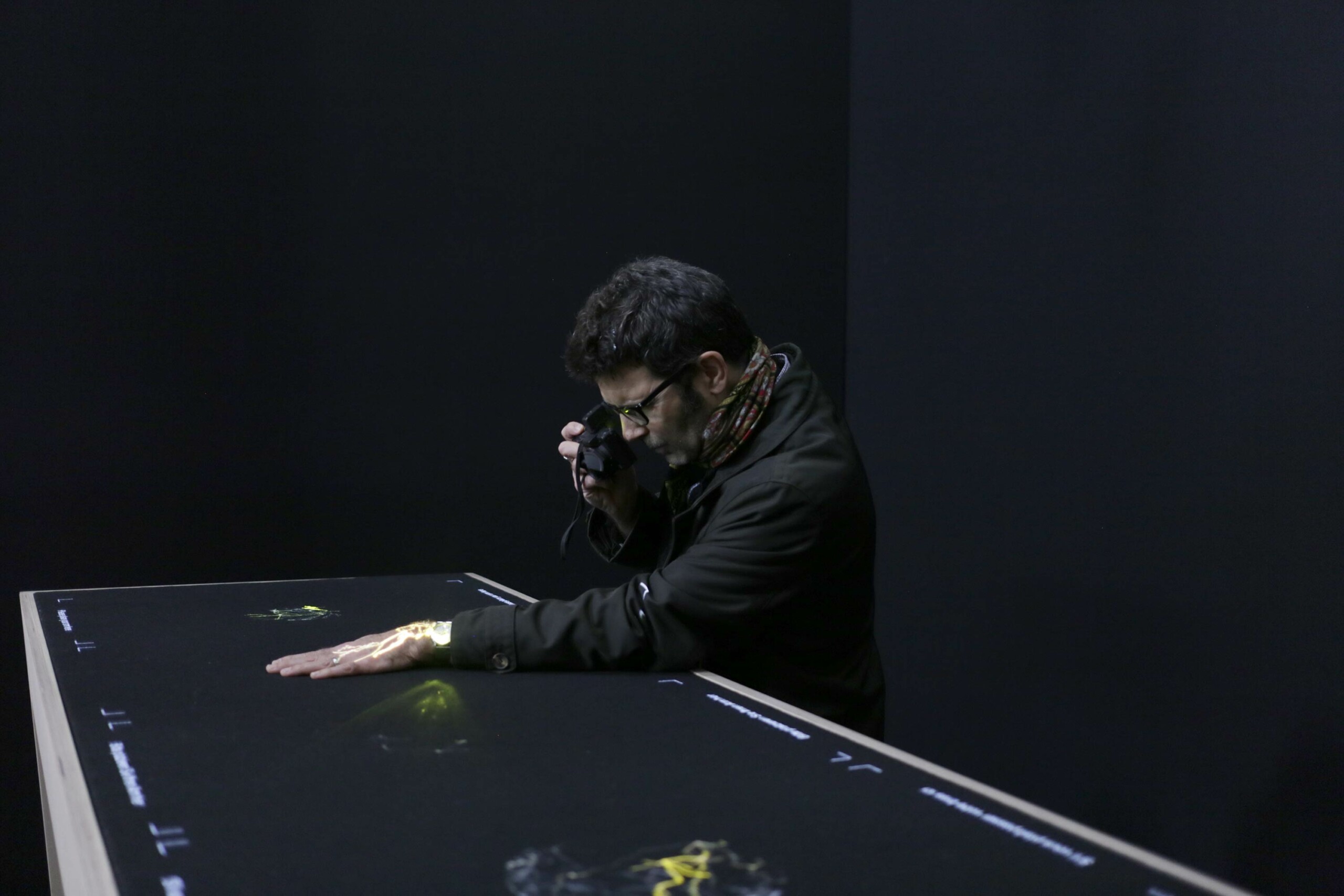 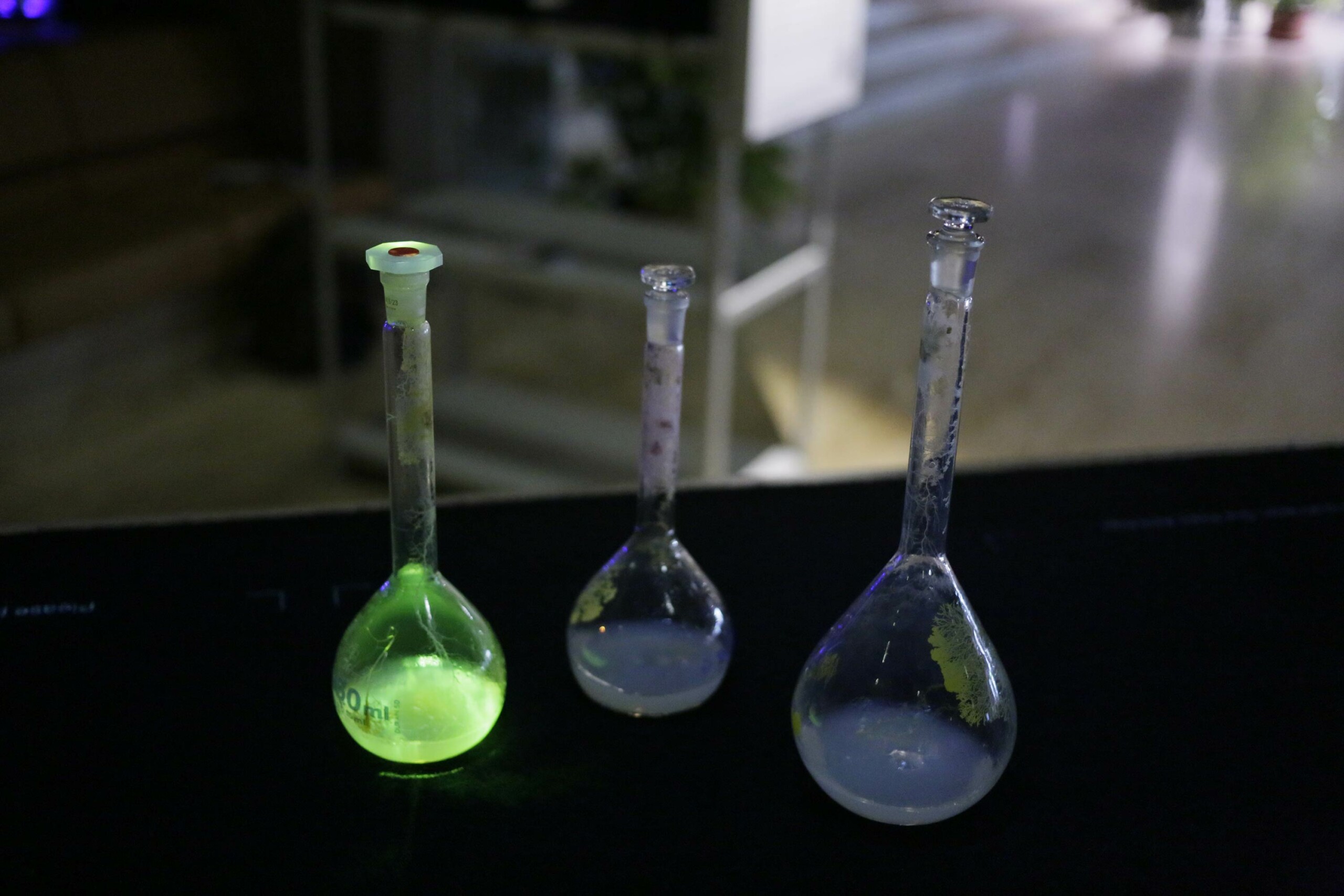 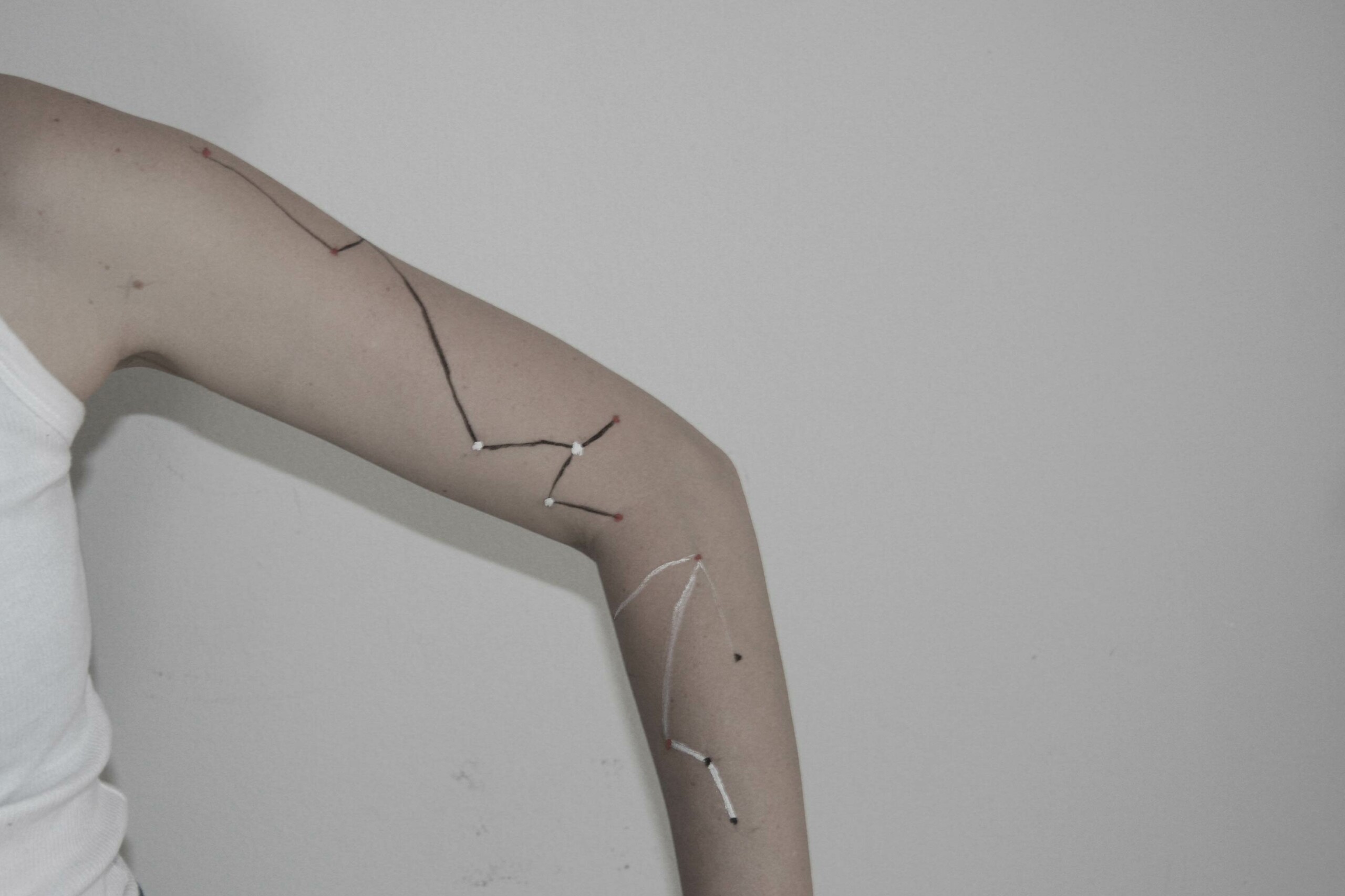 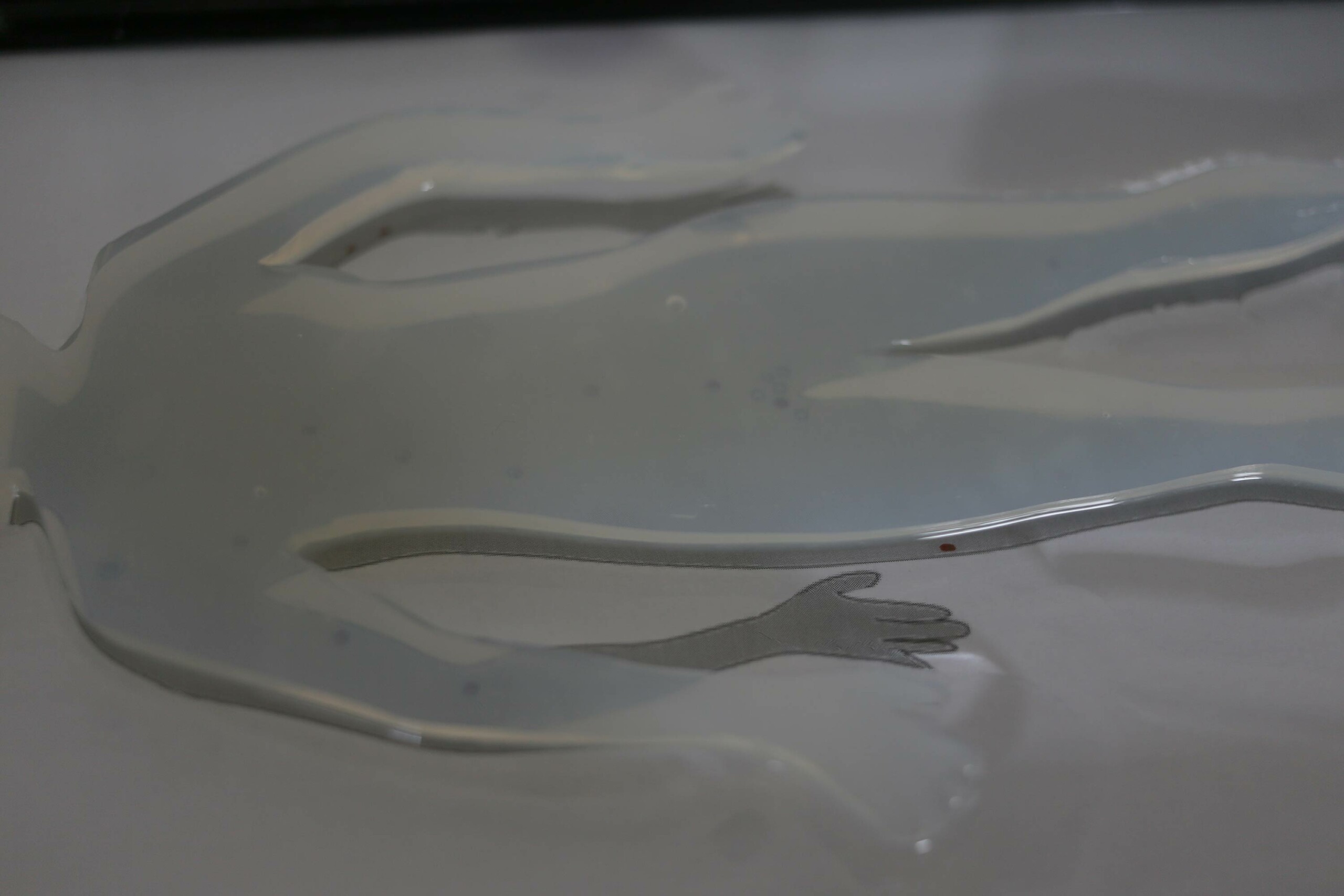