For artist Theresa Schubert fungi are perfect network metaphors, not only due to their aesthetics but also as a philosophy of relations, process and space. For her Box Experiment she built soundproofed boxes with speakers and selected fungi mycelia stemming from the public Walk & Talks. For several weeks she exposed fungi to specific sound frequencies. Schubert was excited to see this had an effect on mycelial growth and metabolism.

How do fungi perceive sound?


When Jakob von Uexküll defined his Umwelttheorie at the beginning of the 20th century, one of his main achievements was to perceive the animal as a subject: “every living being has its own space and its own time”,(1) which meant to him that biological processes are to be analysed within their overall context, time and in consideration of their environment. Remembering Uexküll, my idea for the Mind the Fungi residency was to create a situation for fungi that did not necessarily need to be perceivable by humans but stimulate the fungi’s senses. My intention was, to create an experience for fungi that gave them space and time to evolve in novel conditions and to be able to observe their individual response.

Fungi’s distributed amorphous body is the perfect ground for network metaphors, intriguing me not only due to its aesthetics but also by looking at the mycelial being as a philosophy of relations, of process and space. Although the fungi filaments are hidden to our human eyes, as a network in the forests’ earth some connect to tree roots to create a symbiotic hyper-species. These mycorrhiza are able to communicate via biochemical signals and to exchange nutrients.(2) Taking this as a metaphor for fungi and plants “talking“ to each other, I decided to use sound as a medium to interact with them. While researching the influence of sound on mycelium growth, I was surprised that there was nothing published in the area of arboreal fungi, our subject of study. What influence could sound have on their morphology and metabolism? Could sound exposure change mycelium density or strength and hence make it a different design or building material?

The box experiment
For the experiment, I built custom soundproofed boxes that were housing speakers and selected fungi mycelia(3) stemming from our public Walk & Talks. For several weeks, I exposed the fungi to a specific sound frequency. In parallel, I cultivated the same species in silence for crosschecking. I was excited to see that the sound had an effect on mycelial growth and metabolism, presumably because they can perceive the physical stimulation of the sound waves, even if they cannot hear the sound per se.

Over the course of the residency, I repeated the experiment four times, took measurements, documented via photographs and made optical microscopic analyses. With every repetition, I changed the sound frequency. Since there were no available preliminary studies with arboreal mycelium, I based my choice of frequency on research from plant acoustics where a measurable response in roots occurs at 220 Hertz.(4) Further, I tested 110 Hertz and 440 Hertz as continuous sinus wave and on/off intervals of 10-30 seconds. Irrespective of the frequency, I could observe strong responses in most species, in some, the effect was inconclusive.

From lab semiotics to aesthetics
After conclusion of my lab residency, I realized contradictions between my initial idea of facilitating an objective experience for fungi and the unavoidable anthropocentrism where an experiment is always an act of human-imposed control and reduction in contrast to freedom of nature and complexity. A shift in the meaning had already occurred by taking fungi from nature to the laboratory where all of a sudden its Umwelt is constituted by a Petri dish confined space, regulated nutrition, air and temperature and later introducing sound waves as unexpected, possibly irritating, parameters in this setting. Further nourished by my curiosity of understanding the earth-bound and fascinated by my mycelia observations, I translated the experiment into an aesthetic experience via an interactive video installation entitled Sound for Fungi. Homage to Indeterminacy complemented by arrangements of photos, drawings and diagrams. 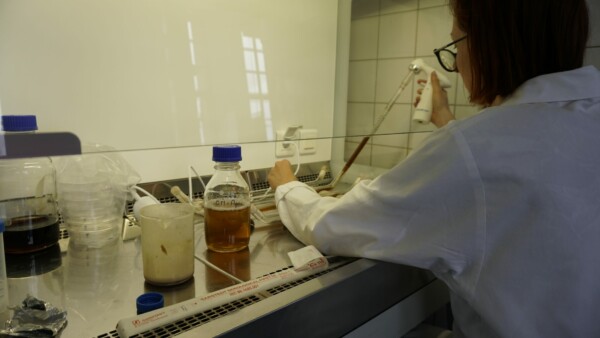 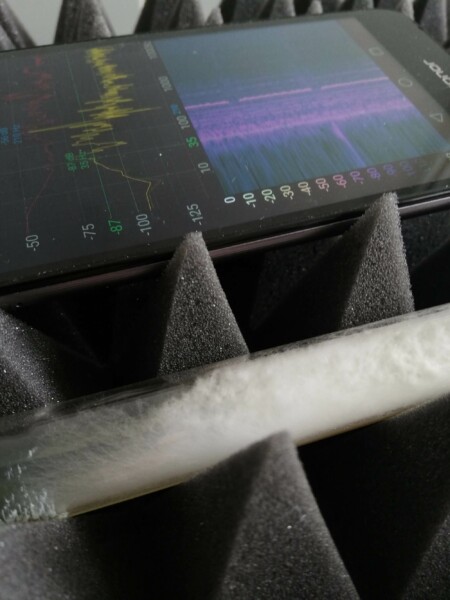 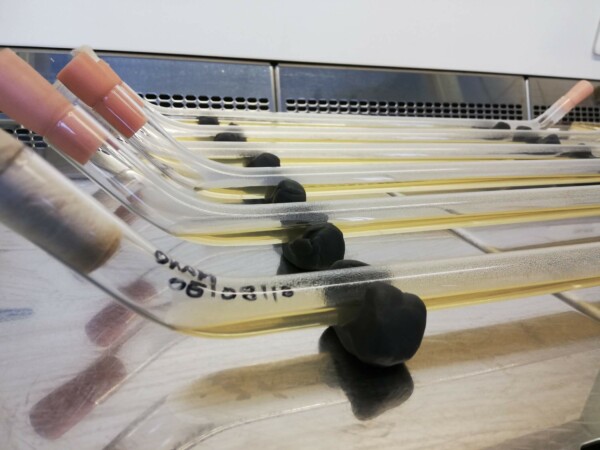 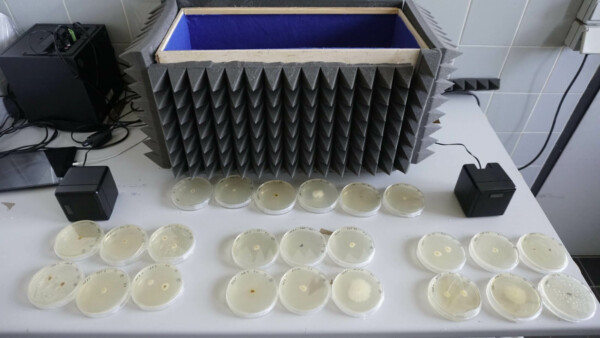 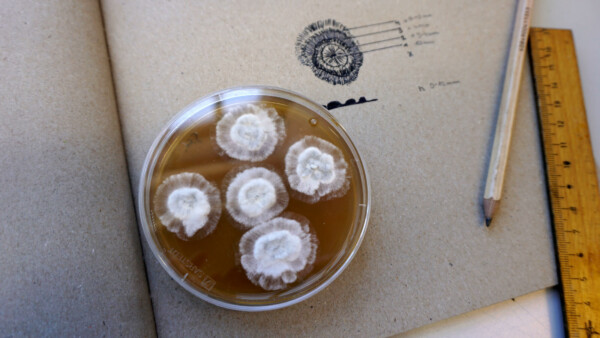 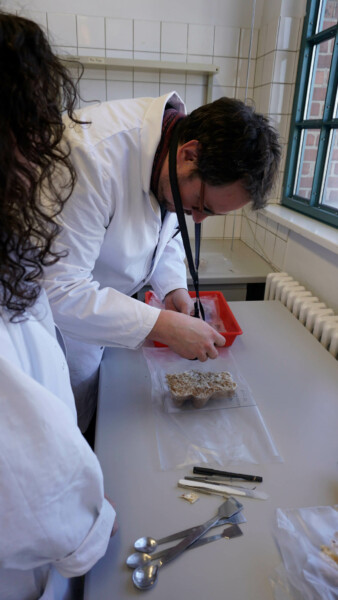 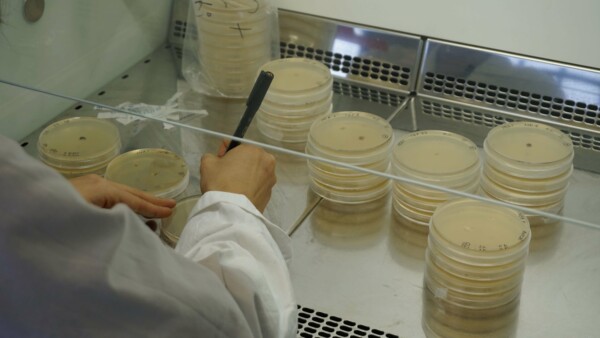 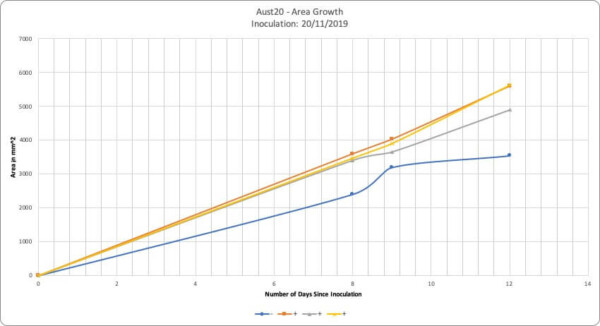 Mind the Fungi (2018-20) is a collaborative project between the Institute of Biotechnology TU Berlin and Art Laboratory Berlin. Biotechnologists and process engineers are researching local tree fungi and lichens (Prof. Vera Meyer/ AMM; Prof. Peter Neubauer / Bioprocess Engineering). The focus is on developing new ideas and technologies for fungal and lichen based materials for the future. Art Laboratory Berlin bridges the gap between science, art, design and the public and offers various Citizen Science formats. The Artist- and Design-Residencies with Fara Peluso and Theresa Schubert bring in art and design as constructive sources of ideas for this research project.